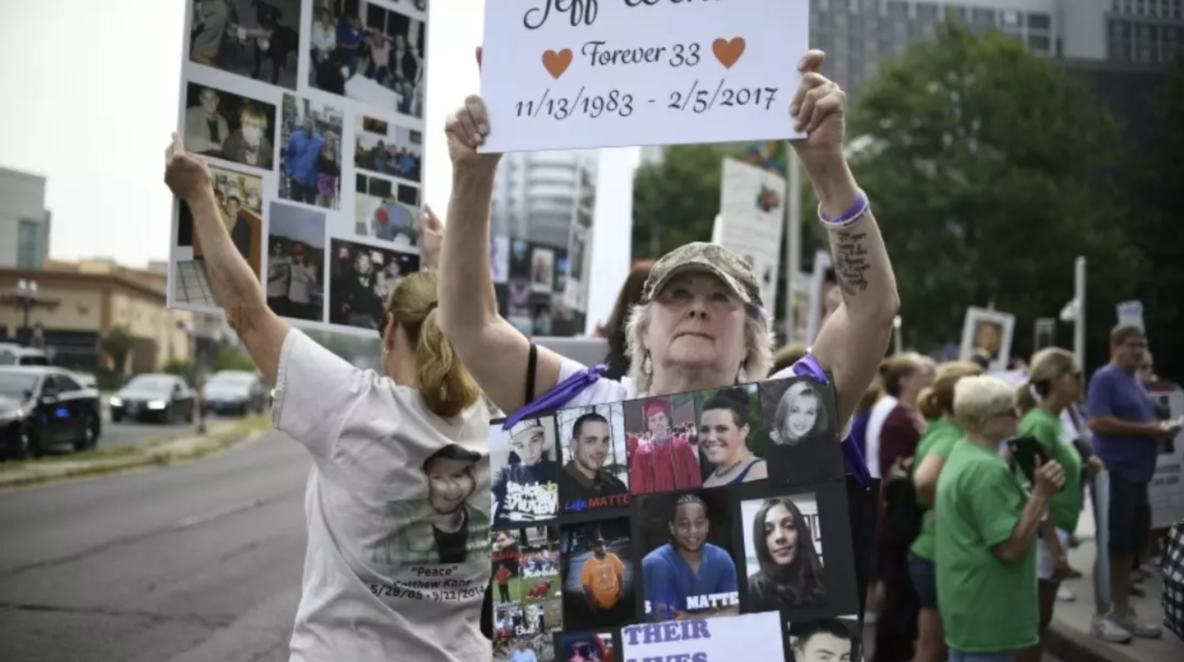 This article was originally published in the Los Angeles Times.

America’s opioid epidemic has claimed more than 400,000 lives and ensnared more than 2 million more in addiction. To the victims left in its wake, a legal drama scheduled to unfold in an Ohio courtroom next month may feel like a true shot at justice.

After downplaying the risks of dangerous and highly addictive prescription narcotics, and of profiting from their spiraling misuse, the purveyors of prescription painkillers could be forced to reckon with the devastating consequences of their actions.

The civil trial promises to expose evidence suggesting that hundreds of companies made deceptive claims about opioids, flooded the market with the highly addictive products and looked the other way as the body count mounted. Even if a trial is averted by a massive settlement — something observers say is likely — the litigation has already produced a historical record of an epidemic that is likely to be with us for several generations.

In a sign of just how deeply opioids have been knit into the fabric of society, the case pits roughly 35,000 accusers against 348 named defendants. This ensemble of pharmaceutical companies, mom-and-pop drugstores, professional medical associations and assorted individuals could find themselves liable for billions of dollars in damages for seeding and supplying an epidemic of death and dependence.

The case has the potential to transform key players in the epidemic, starting with the company most prominently linked to prescription opioids. OxyContin maker Purdue Pharma filed for bankruptcy protection this month with the goal of emerging as a quasi-charity that would steer all of its future profits toward resolving the opioid drug epidemic. Along with $3 billion from the personal fortune of the Sackler family that controls the company, the payout could be worth more than $10 billion over time, according to Purdue. Neither the Sacklers nor Purdue would acknowledge any wrongdoing as part of the deal.

Equally important, a trial in the case known as Multidistrict Litigation 2804 would explore some of the thorniest questions in America today: Who bears responsibility for addiction? Can businesses be blamed if government agencies fail to enforce the law? And when profits drive the companies that deliver American healthcare, where does that leave patients?

Questions like these “require a broad conversation,” said Thomas Cooke, a professor of business law at Georgetown University. But the companies in the Ohio case “would rather this go away. They’d rather not have that conversation.”

Nor does U.S. District Judge Dan Aaron Polster, who presides over MDL 2804, think a Cleveland courtroom is the place to resolve such conundrums. Polster has leaned hard on all sides to settle the case and avert a trial.

Whether such deals deliver justice will be in the eye of the beholder. But they could bring swift resolution to a case that otherwise threatens to grind on for years. With opioids claiming 130 lives a day in the United States, those who favor a settlement argue that time and money are better spent fighting the epidemic than debating who’s to blame for it.

Addiction to prescription opioids — including oxycodone, hydrocodone, fentanyl, morphine and codeine — now rules the lives of roughly 1.7 million Americans. Some 652,000 Americans use heroin, and roughly 80% of them are thought to have started down that road by misusing prescription narcotics. Opioid-related overdoses claimed the lives of 47,600 people in 2017, the most recent year for which reliable figures have been tallied.

And it will get worse. On its current trajectory, the epidemic could kill close to 82,000 people a year by 2025, according to one recent projection. With just a bit of backsliding, the death toll could be as high as 200,000 a year by then.

The White House Council of Economic Advisors estimated that opioid abuse cost the nation $504 billion in 2015 alone — not just for treatment and policing, but in the lost economic potential of those ensnared by the drugs.

The case in Cleveland is thelargest and most complex civil action in U.S. history. It began in 2017 as an effort to consolidate close to 200 opioid-related cases from around the country into a single proceeding. More suits have been filed since, and there are now roughly 2,000 cases brought by counties, cities, tribal entities, hospitals, insurance plan administrators and consumers wrapped into MDL 2804.

Last year, a group of state attorneys general added another layer of complexity by insisting that they should have the leading voice in making deals to resolve the opioid crisis and protect the well-being of their citizens. The result: a separate track of negotiations between the companies and 49 states — all except Nebraska — for a global settlement that could resolve the court case or exist alongside it.

“It’s diabolically complicated,” said Mike Moore, an attorney representing four states and a handful of cities and counties in MDL 2804.

The plaintiffs charge that corporate greed trumped the public’s health at every turn.

Greed drove opioid manufacturers to oversell and overproduce the drugs, the lawsuits allege. Greed drove companies that distribute prescription drugs to oversupply pharmacies, they add. And greed drove pharmacies to overdispense the drugs to patients who were becoming hooked, to criminals who were diverting them to the black market, and to addicts shopping for a fix.

The evidence for some of these charges is not hard to find. Nor, in many cases, is it contested.

In a 2003 letter to Purdue Pharma, the Food and Drug Administration warned that its advertisements “grossly overstate the safety profile” of OxyContin and charged that the company was promoting it for unauthorized uses. Minimizing the drug’s addiction risks and urging its unjustifiably broad use were “especially egregious and alarming,” the FDA wrote.

In a criminal case four years later, Purdue and three top executives pleaded guilty to misleading regulators, doctors and patients about the drug’s addiction risks. The company paid $634 million in fines, but no one served jail time.

But in the years since, Purdue continued its efforts to make pain a “vital sign” to be routinely treated, urged doctors to prescribe OxyContin more freely, and targeted patients with ads that portrayed the drug as a low-risk balm.

As lines formed around certain drugstores and the diversion of opioids to the black market became harder to deny, the seeming lapses of pharmacies and prescription drug middlemen came into greater focus.

In 2008 and again in 2017, drug distribution giant McKesson Corp. paid millions to settle federal claims that it was supplying pharmacies with suspicious quantities of opioids. Another distributor, Cardinal Health Inc., settled similar charges with the federal government in 2008.

Some of the cases swept into MDL 2804 accuse the defendants of fraud, corruption and “unjust enrichment.” Others claim the companies have run what amount to illegal drug enterprises.

But virtually all agree on this: The collective actions of manufacturers, distributors and pharmacies have led to the social equivalent of an oil spill or a nuclear accident — and the resulting “public nuisance” has foisted steep, unwelcome and preventable costs upon cities, counties and tribes.

“You marketed this stuff as nonaddictive, and you got us addicted,” said Paul Farrell, a Huntington, W.Va., attorney who represents several cities and counties in MDL 2804. “You were supposed to monitor transactions to ensure only medical needs were being fulfilled. Instead, you poured enough opioids into places like West Virginia to supply every American man, woman and child with 67 prescription pain pills a year. … Clean it up.”

That legal argument — that an addiction epidemic can be treated like an environmental disaster — is “incredibly unique,” Cooke said.

Oklahoma’s statute holds a defendant liable for actions that “annoy, injure and endanger the comfort, repose, health and safety of others” and which “offend decency” and “render Oklahomans insecure in life and in use of property.” Although other states use slightly different language — and some have no such law — the notion of “public nuisance” has become a legal principle broadly shared across state lines.

The MDL 2804 defendants say this use of public nuisance laws is an overreach. For roughly a century, the laws have been used mainly to resolve property disputes. If this new view is allowed to stand, they warn, the effects could be widely felt. Makers and sellers of goods such as smartphones, skateboards or video games could be held liable for the damage caused by consumers who used or misused those products.

The defendants also argue they are blameless because they adhered to the complex laws that govern their operations.

Manufacturers say they briefed doctors on opioids’ risks as they were understood at the time and produced the drugs under the watchful eyes of the FDA and the Drug Enforcement Administration.

Distributors maintain they followed DEA rules as they warehoused the drugs, recorded their volumes and whereabouts, and shipped them to drugstores as they were needed to fill prescriptions.

Pharmacies say they dispensed the drugs as ordered by doctors and under rules dictated by state legislatures and pharmacy boards.

If any of the defendants had failed to comply with laws and regulations, they assert, the government should have stepped in and stopped them.

Detecting and acting on signs of an addiction epidemic, they say, was the responsibility of police departments, county public health offices, hospitals, state medical and pharmacy boards, the DEA and the FDA.

The argument puts some of the plaintiffs on the defensive, but it’s not clear it will work in court, legal experts said.

The defendants “have 100% responsibility for what they create and what they put into the marketplace,” Cooke said. “A potential juror would see blaming the government as an effort to deflect responsibility.”

This line of defense is also undercut by the litany of penalties imposed by government regulators over the years.

The defendants, for their part, have pointed the finger of blame at one another, at the physicians who wrote opioid prescriptions, and at the people who took the drugs and became addicted.

A road map to blame

Who did cause the crisis? The answer could come, in part, from a massive DEA database.

ARCOS — short for Automation of Reports and Consolidated Order System — offers a comprehensive tally of opioid medications in the U.S. In exquisite detail, it documents the journeys of 76 billion pills from manufacturers to pharmacies.

According to ARCOS, the number of prescription pills produced and distributed across the country grew from 8.4 billion in 2006 to 12.6 billion in 2012. During that period, opioid-related deaths jumped from 17,000 to close to 24,000 a year, setting the stage for an even deadlier wave of addiction to heroin and illicit fentanyl.

The database provides a day-to-day record of the epidemic as it gained a foothold in cities and counties across the nation. But the DEA, which set yearly production numbers for opioids and required distributors to report pharmacy orders, failed to detect and rein in oversupply or diversion, the defendants said.

“Should we be second-guessing the judgment of doctors in the room with their patients, or of a pharmacist filling that doctor’s prescription?” said Kristin Chasen, a spokeswoman for McKesson. “We don’t think so.”